Two dogs that support South Wales Police Federation members with their wellbeing are part of a project which has recently won a national mental health award.

It has been a double celebration for those at Oscar Kilo, the National Police Wellbeing Service, as it appointed its 100th official OK9 wellbeing and trauma support dog in the UK just days before the scheme won a national award for the mental health support it offers officers and staff.

South Wales Police’s furry friends Carter and Winnie are among the 100 dogs to have become part of the OK9 scheme after it was launched a year ago, aiming to recognise and build on the work of wellbeing dogs within forces, creating a standard set of policies, uniform, and training across the nation. 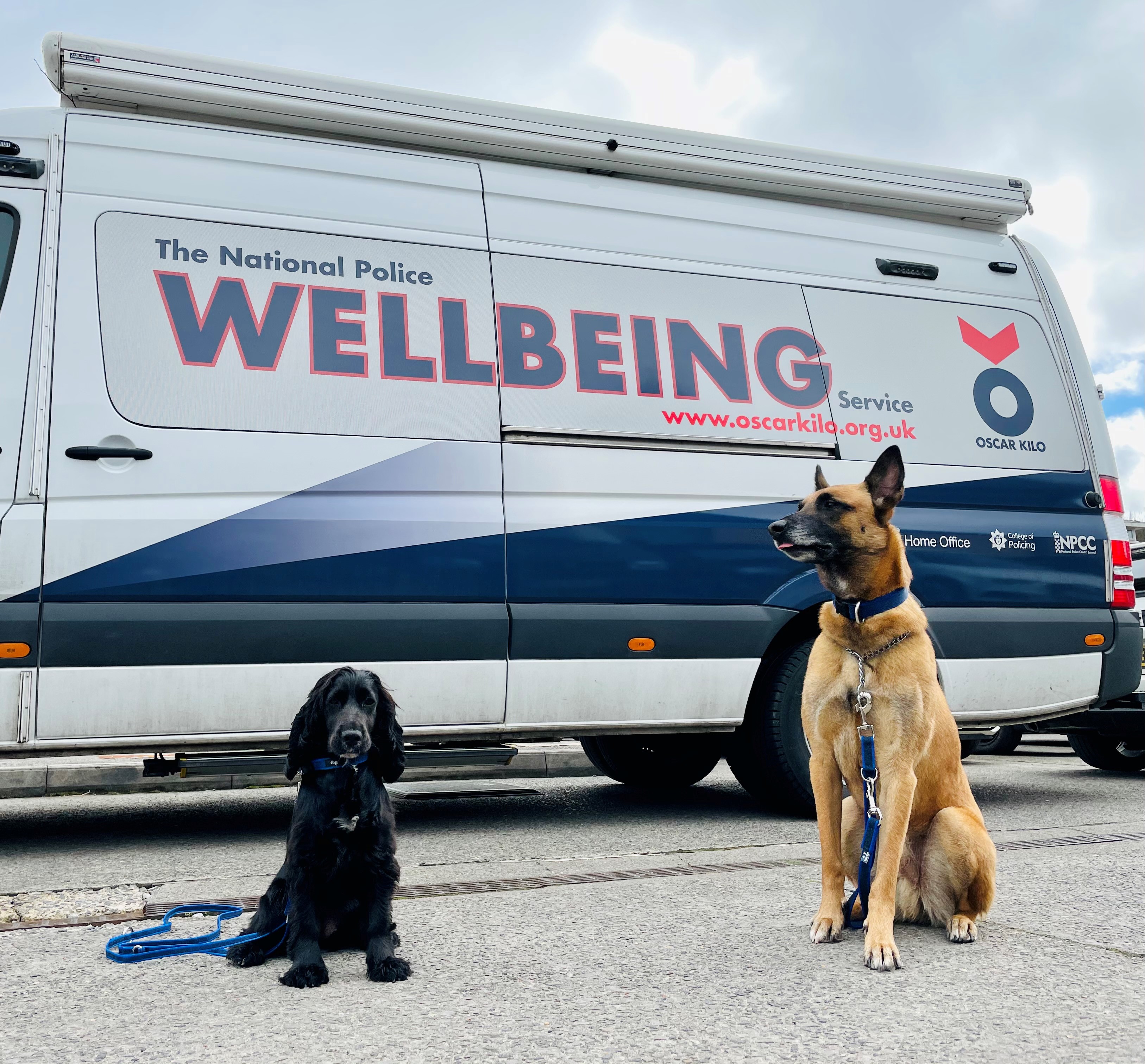 Garry Botterill, who leads the national project for Oscar Kilo, says he had hoped the initiative would go well but never imagined it would go quite as well as it has.

“I knew the dogs would be popular, but to have appointed 100 dogs in a year is just brilliant and then to go on to win an award, that was definitely a bit of a pinch me moment,” added Garry.

“Honestly, I’ve been surprised that there’s not been any adverse feedback. With any new initiative, you tend to get the doubters who make comments just because they want to – we braced ourselves for more resistance but never got any.”

Each of the OK9 wellbeing dogs has been given a jacket to make its position official, and aims to break down barriers surrounding mental health within the Force.

“Of course, it’s great to see so many pictures of officers and police staff smiling with the dogs but there is a serious side to what we’re doing too and that’s to smash the stigmas surrounding mental health,” added Garry.

“All the dog handlers are passionate people, passionate about looking after their colleagues. The dogs are simply a tool to encourage those difficult conversations – I like to say the dogs creating a ‘furry bridge’, helping people to talk.”

Each dog has a handler, who is trained to support officers when they need help.

“Conversations have to start somewhere and when there’s a dog present, people are more likely to open up – whoever they are, and from all ranks. Nobody sees it as a weakness, getting down and speaking to dogs,” Garry said.

Each force uses its wellbeing dogs in different ways, with some supporting officers and staff internally, others helping victims or offenders and in some cases, simply building bridges with the community.

“We’ve set an ambitious goal to get 30 forces on board and so far, we have 25 – and to be honest, I think the only reason some forces haven’t yet got involved is that they either don’t know about the project or they don’t have the capacity,” explained Garry.

“But being around dogs helps to reduce stress and anxiety, it’s important that the need to support people with their wellbeing is widely recognised across each force.”

As well as eligible pet dogs that belong to staff and officers, the project also allows retired police dogs and police dogs that are no longer able to work to continue supporting people.

On 24 March, the National Police Wellbeing Service’s OK9 scheme won the “Best New Mental Health Initiative Award” at the national Inside Out Awards 2022.

Speaking about clinching the title, Garry said: “Wellbeing dogs in the police have been around for a while but they’ve never been made official like this before and they have become hugely popular.

“For us to get an award, none of us expected that. It helps to raise awareness of the project and the dogs, and mental health.”

Garry said so much work, time and effort go into making the project possible, the award was received on behalf of everyone involved.

For more information on the wellbeing and trauma support project or if you would like to hear more about how you can introduce a wellbeing dog into your work, email Garry on: Garry.Botterill@college.pnn.police.uk