Two South Wales Police officers have been honoured at the national Police Bravery Awards after being nominated for the “calm and selfless” way they dealt with a traumatic situation when called out to a report of a man who was threatening to kill himself with a knife.

PCs Brian Cooper and Ryan Morgan joined fellow nominees from forces across England and Wales at a ceremony in London on Thursday (9 December).

Policing minister Kit Malthouse,  shadow home secretary Yvette Cooper and Metropolitan Police Commissioner Dame Cressida Dick were among the audience and Prime Minister Boris Johnson sent a message of thanks and support to all the brave officers nominated for awards.

Earlier in the day, all nominees attended a reception at No 10 Downing Street hosted by Home Secretary Priti Patel.

PCs Cooper and Morgan responded to a report on 26 September 2019 involving a suicidal male having locked himself into a bathroom at an address in Swansea.

When they forced the door open they were confronted by the sight of an agitated man, stripped to the waist and sitting in the bath, repeatedly stabbing himself to the torso with a knife.

They tried again to engage with him, to no avail, and footage from the officers’ body-worn video (BWV) shows PC Cooper attempt to take the knife from him.

As this was unsuccessful and the man continued to stab himself, PC Morgan deployed his Taser. The video camera footage shows the man jump up and continue to self-harm, with a significant amount of blood now showing, and the Taser was deployed again.

This time the man slumped in the corner of the bath and was approached by PC Cooper who took the knife. The man’s wounds were bleeding significantly and he remained non-compliant, screaming hysterically. 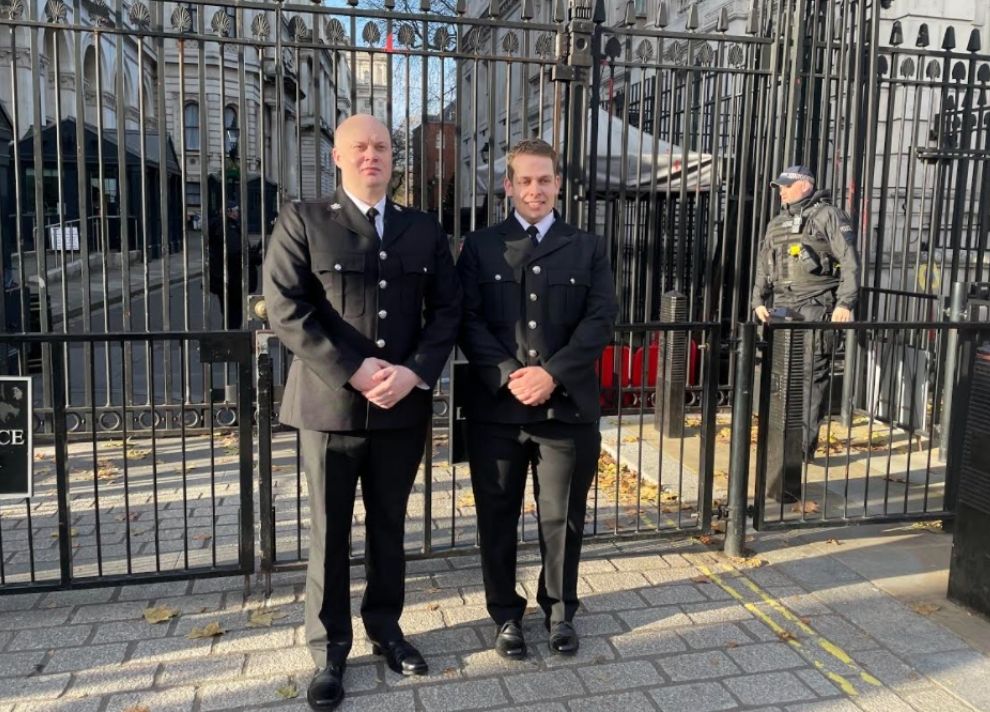 As the officers attempted to tend to the man’s injuries, he tried to bite them. However, the evidence shows both PCs Cooper and Morgan displaying significant control and empathy as they restrained the man while also administering first aid.

Steve Treharne, chair of South Wales Police Federation which nominated the officers for the bravery awards, said the BWV evidence makes clear what a “traumatic and challenging incident” the officers were dealing with.

“These two officers were worthy nominees for the Police Bravery Awards and I was delighted to accompany them to this prestigious event,” said Steve, “Each and every day officers across the country are putting their lives on the line as they seek to serve and protect their communities. Time and time again, nominees said they were just doing their job but I think it is really important that no one takes for granted their efforts and that is why the Police Bravery Awards are such an important event in the policing year.”

The National Police Bravery Awards honour officers from across England and Wales who have performed outstanding acts of bravery while on or off duty.

Four West Yorkshire Police officers who detained two attackers who murdered a man with a samurai sword were named overall winners at the awards ceremony.

The colleagues were honoured for their professionalism during a horrific incident in January 2020 when they responded to reports of a man being viciously attacked outside a pharmaceutical factory in Huddersfield.

The officers – one of whom was in the first two weeks of her career – were confronted by the barbaric sight of attackers hacking at the victim with a sword and knives when they arrived at the scene. They bravely managed to detain both assailants, despite the offenders still being in possession of the murder weapon and knives.

Prime Minister Boris Johnson praised the “dedication and conscientiousness” of all the nominees and paid tribute to their bravery.

He said: “Acts of bravery in policing are, necessarily and thankfully for us all, commonplace. Every day, local and national media is awash with examples of police heroism. Be it confronting dangerous and violent people, rescuing members of the public or working day and night on the most harrowing of cases, bravery is a defining characteristic of the police.

“It is this unflinching bravery, alongside your dedication and conscientiousness, that inspires my steadfast support for the police.

“I am bowled over by the nominees. You are a credit to your forces and your illustrious forebears in policing. I salute each and every one of you.”

Kerry McMahon-White, head of partnerships at Police Bravery Awards sponsor Police Mutual, said: “The role of a police officer has never been easy, but the last 18 months has seen you continue to protect the public while battling the unprecedented impact of Covid-19, putting the safety of others before yourself with unwavering commitment.

“I thank each one of you for the sacrifices you have made with resolute dedication in the most difficult of circumstances.

“To all of you who have been nominated; your acts of bravery are exceptional and this evening we pay tribute to your remarkable heroism and dedication.

“All at Police Mutual are honoured to be able to support those who have gone above and beyond and offer our heartfelt thanks and congratulations to all nominees.”